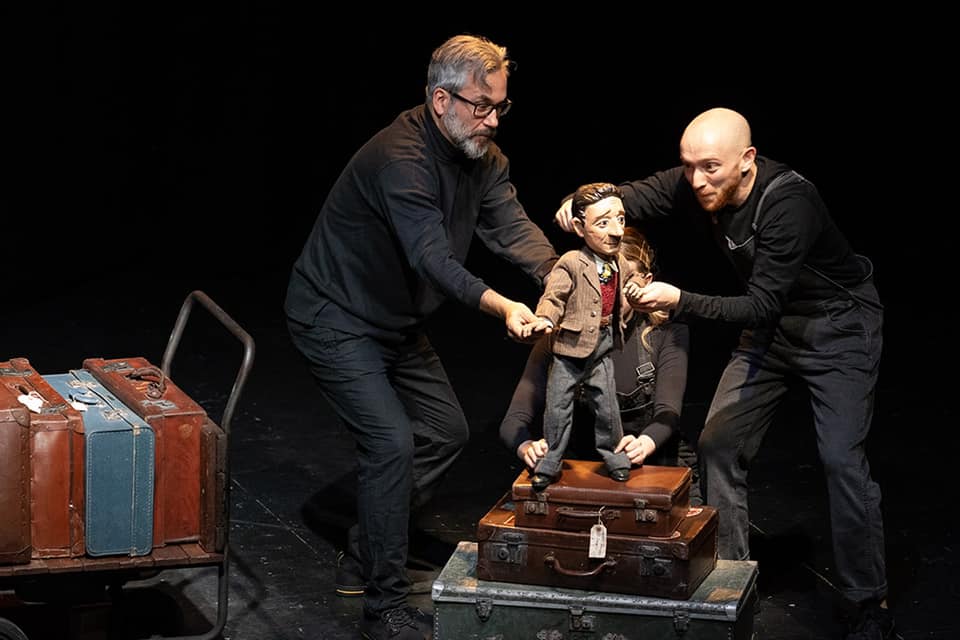 Join Eli and he shares the story of his life, and we embark with him to explore his journey as a refugee. Eli and the Golem was conceived during a conversation back in 2020 with Amir Nizar Zuabi, Artistic Director of The Walk – Good Chance theatre company’s epic undertaking to walk a 3.5 metre puppet of a Syrian refugee girl from Turkey to Manchester. Nizar wanted a puppet ‘intervention’ and we thought the story of a refugee from living memory would provide perspective and distinguish some of the myths from truths about the journey from citizen to refugee. The ‘intervention’ (taking place in Dover on 20th October) is 15 minutes in length, but out of it has grown an hour long play. Although many who welcomed children to the UK on the Kindertransports of 1938/9 were not Jewish, our play was inspired by the story of Lord Dubs, who’s father fled the day the Nazis entered Prague only to be joined by Alf, aged six, later on at Liverpool St station.

Though this is not his story, the events of the play draw on real life testimony of Jewish refugees and holocaust survivors. John Lloyd, producer of The Hitch Hiker’s Guide to the Galaxy and Blackadder, tells of how it took him several years to get backing for Spitting Image. ‘Puppets are for children’ was an all too familiar response to his approaches. After the National Theatre’s landmark production Warhorse, we have a wider vision of what puppetry can achieve. It can lodge itself in our imaginations and do it’s work often to greater effect than any film’s computer generated imagery. This is because we, the audience, are so utterly complicit in giving them life. Despite ourselves we fill in the gaps around them, give them life and empathy. Puppeteers may have a few tricks of the trade, but much of the work is being done by the audience. It is interesting to note that though the myth may still persist that puppetry is for children, under other more autocratic regimes it has become a vehicle for political dissent, satire and resistance. There’s something in creating an illusion through manipulation that makes us think.

Eli and the Golem is for anyone aged 10 or older, school groups are very welcome.